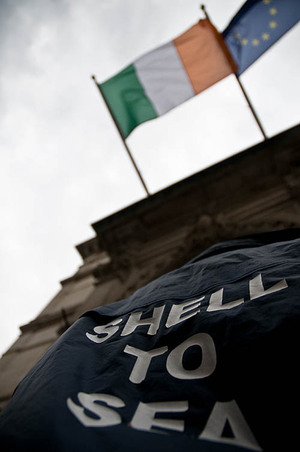 Excerpt from recording by confiscated video camera in a Garda vehicle on March 31, 2011, after the arrest of two women at Aughoose for public order-related offences relating to the Corrib gas project.

Garda A: “Who is them two lassies, do you know the two of them?

Garda B: “I don’t know the second one, the first one is with blonde hair.”

Unidentified garda: “She was up on the tractor earlier on.”

Garda A: “It’d do no harm to get the second one’s name again?

Unidentified garda: “ Is she a Yank?

Garda B: “Well whoever, we’ll get Immigration f**king on her.”

Garda A: “She refused to give her name and address and told she would be arrested.”

Garda B: “I wouldn’t go that far yet….. She was living down at that crusty camp [Rossport Solidarity Camp], f**k sake, you never know what you might get.”

Garda A: “Give me your name and address or I’ll rape you.”

Unidentified Garda: “Hold it there, give me your name and address there, I’ll rape you.”

Garda A : “Or I’ll definitely rape you.”