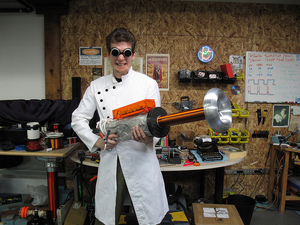 Mad scientist Rob Flickenger built a functioning Tesla gun (based on one featured in the comic Five Fists Of Science). He’s even provided plans for those mad enough to follow his lead.

Then we have Mythbusters’ Adam Savage talking about his obsessive 13-year quest to build a replica of the Zorg ZF-1 super gun from The Fifth Element.