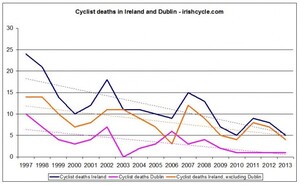 “Five cyclists were killed on Irish roads in 2013, three less than the previous year and a joint 20-year low shared with 2010.”

“The decline is the opposite of the general trend, which includes overall road deaths rising from 160 to 189 deaths in the last year. The overall amount of deaths included 29 pedestrians, 27 motorcyclists, 95 motorists and 32 passengers of motorists.”