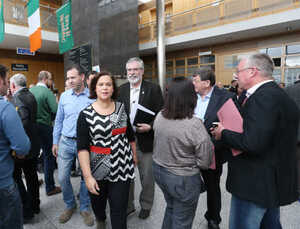 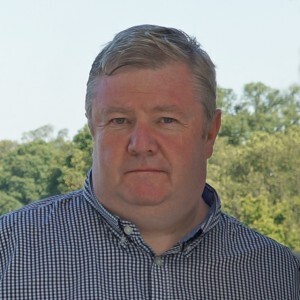 From top: Sinn Fein’s Mary Lou McDonald and Gerry Adams (centre) at a party strategy meeting in Ballyfermot at the weekend; Derek Mooney

How Sinn Féin conducts its change of leadership will determine if the transition into a ‘normal’ political party is genuine or merely an illusion.

Yesterday was a busy media day for Sinn Féin’s Deputy Leader, Mary Lou MacDonald. Within the space of an hour she had appeared on RTÉ’s The Week in Politics and BBC 1’s Sunday Politics.

Mary Lou was doing what she does better than anyone else in Sinn Féin: taking no prisoners, firmly holding the party line and all without seeming unduly hostile or aggressive.

During the course of her one-on-one interview with BBC Northern Ireland’s Mark Carruthers; Mary Lou described Sinn Féin as being a party “in transition”.

Given the context, this was a reference to either: the potential for generational change in the Sinn Féin leadership, or to Sinn Féin’s ambition to be more seen as a potential party of government.

Perhaps it was a reference to both – either way, I am sure Mary Lou meant the phrase to convey the sense of a political party undergoing change and development.

I happen to agree that Sinn Féin is “in transition”, except that the transition I believe it is undergoing is into becoming a normal political party. It is a transition that it has been undergoing for some time, with varying degrees of success, but it is still an ongoing process.

Sinn Féin is not so much a “party in transition” as it is “transitioning into a party”.

The party leadership is an obvious example. It is not the only example.

Normal political parties do not have T.D.s collecting convicted Garda killers from prison upon their release, nor do they hail convicted tax evaders as “good republicans”, but for the purposes of this piece, let’s just focus on the autocratic nature of Sinn Fein’s leadership.

Though he is over thirty-three years in the role, we are expected to believe that no one over that time in Sinn Féin has ever been unhappy with Gerry Adams’ leadership or ever willing to challenge openly it.

For most of those 33 years obedience to the leadership of Adams and McGuinness has been a core principle – one that seemed to trump everything else.

But as the fictitious Chief Whip, Francis Urquhart, observes in the opening sequence of House of Cards: “Nothing lasts forever. Even the longest, the most glittering reign must come to an end someday.”

The blind obedience has started to slip over recent years. From the resignations of various Councillors North and South in the years after the 2007 election to more recent murmurings, including the resignations of 18 SF members in North Antrim in protest at the manner in which a replacement MLA was appointed and the Chair of Sinn Fein’s Virginia-Mullagh Cumann writing to the Irish News to say it was time for Adams to step down.

Even the most disciplined and united of political parties have various groups or factions not entirely happy with the leader.

Our most popular and electorally successful party leaders like Jack Lynch, Garret Fitzgerald or Bertie Ahern have had their internal party critics, even at times when their leadership seemed at its most secure and assured.

They either feel the leader is too progressive or too conservative, too weak or too strong, or they believe that their personal talents and skills may be better recognised if there was a new leader in place.

Now, after over three decades of Gerry Adams’ leadership, it seems that Sinn Féin has a plan to do what other political parties do routinely and relatively seamlessly: change leader.

Except in Sinn Féin’s case it is a “secret” plan. Even the current Sinn Féin Deputy Leader concedes that she does not know what precisely is in this plan.

In most political parties the process for electing a new leader is transparent. People can see how potential leadership candidates are nominated and who has a vote in electing the new leader.

In some cases, this is done by an electoral college such as in Fine Gael where members of the parliamentary party have 65% of the votes; party members 25% and county councillors 10% or, as in the case of the Labour Party, it is done via a one member one vote system with all valid party members having a vote – though as we saw in the recent contest only the parliamentary party can nominate the candidates.

How will it happen in Sinn Féin? The stock answer from Adams and others is that the Sinn Féin Árd Fheis will decide, but how will that play out?

Will it really decide?

Will there be a real contest with rival candidates travelling to constituencies to meet those voting in the leadership election and set out their competing visions?

Or, will a new leader ‘emerge’, as the British Tory party leaders once did, following the intervention of a group of shadowy figures in Belfast with that decision gaining the semblance of democratic authority with a set-piece ratification at an Árd Fheis.

While I won’t hold my breath waiting for that change of leadership to actually happen, I am also a political realist and recognise that asking any leader to be specific as to when they plan to stand aside is to ask them to surrender their leadership at that moment.

How Sinn Féin conducts the change of leadership, whenever it happens, will be a major test of its transition. It will determine if the transition is merely an illusion or it is a sincere and genuine attempt to become a real political party.

Though I am clearly no fan of Sinn Féin, I believe that it is more the latter than the former, particularly as the organisation takes on new members and is compelled to allow more internal debate. Time will tell if I am right to be so optimistic. 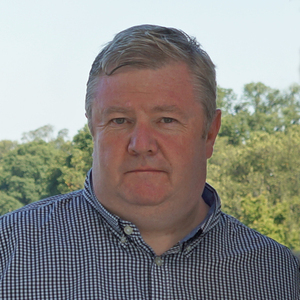 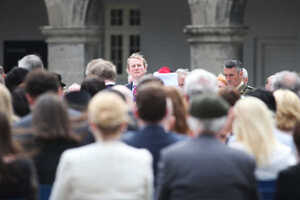 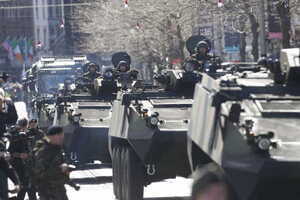 14 thoughts on “Still Behind You”