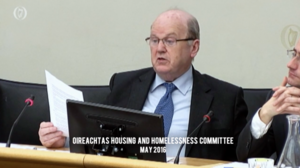 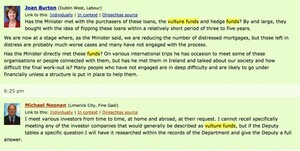 Further to last night’s documentary, The Great Irish Sell Off…

Minister for Finance Michael Noonan was recalled talking about vulture funds at an oireachtas committee on housing and homelessness – in May 2016.

“You criticise me for not intervening with vulture funds. Well, it was a compliment when they were so dubbed in America because vultures, you know, carry out a very good service in the ecology. They clean up dead animals that are littered across the landscape.”

Joan Burton: “Has the Minister met with the purchasers of these loans, the vulture funds and hedge funds? By and large, they bought with the idea of flipping these loans within a relatively short period of three to five years.”

“We are now at a stage where, as the Minister said, we are reducing the number of distressed mortgages, but those left in distress are probably much worse cases and many have not engaged with the process.”

“Has the Minister directly met these funds? On various international trips he has occasion to meet some of these organisations or people connected with them, but has he met them in Ireland and talked about our society and how difficult the final work-out is? Many people who have not engaged are in deep difficulty and are likely to go under financially unless a structure is put in place to help them.”

Michael Noonan: “I meet various investors from time to time, at home and abroad, at their request. I cannot recall specifically meeting any of the investor companies that would generally be described as vulture funds, but if the Deputy tables a specific question I will have it researched within the records of the Department and give the Deputy a full answer.”

Richard Boyd Barrett: ‘Will the Minister provide details of meetings held between his Department officials and vulture funds during his terms as Minister for Finance; if he or his officials suggested to these funds that they might benefit from tax loopholes such as section 110 of the Taxes Consolidation Act or any other tax loopholes for the purposes of minimising their tax contributions; and if he will make a statement on the matter.

Michael Noonan: “While the term vulture fund is not recognised in the Taxes Acts, a small number of structures that have been using section 110 TCA 1997 to avoid paying tax on Irish property transactions have been brought to my attention.  To address these concerns, on 06 September, I published a proposed amendment which tackles any misuse of the current section 110 regime in relation to Irish property. Details may be found in my press release on my Department’s website regarding Section 110s.  The amendment as published is not finalised and may be subject to further refinements to clarify certain aspects of the provision.”

“In the context of the State’s interests in Nama, IBRC, the banks and other financial institutions, my officials would have met with representatives of companies that would have been involved in bidding for and purchasing loan books.  However, at no stage would my officials have been in a position to suggest any mechanisms regarding the minimisation of tax.”

“The rationale for publishing said proposal was to ensure appropriate feedback is received on a technical and complex section of the Taxes Acts.  As is standard practice when a technically complex piece of legislation is being examined, officials from the Department of Finance and the Revenue Commissioners have held meetings with a broad range of stakeholders including meeting with members of the Irish Debt Securities Association, the body that represents the securitisation industry and other members of the accounting, law and tax professions.  My officials are currently in consultation to clarify certain aspects of the provision and to ensure the proposal successfully carries out the intention for which it was created. This is an ongoing process and I would like to reiterate that we welcome input from all stakeholders, including Deputies, on the matter.” 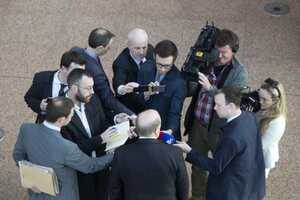 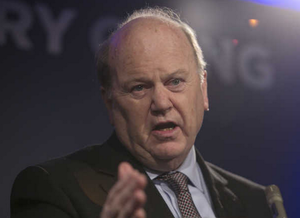 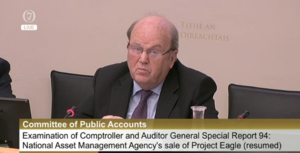 38 thoughts on ““Vultures, You Know, Carry Out A Very Good Service In The Ecology””