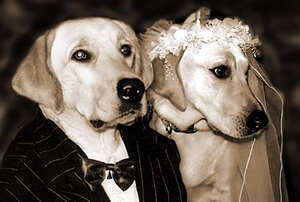 BETWEEN 10 and 15 per cent of the civil ceremonies conducted across the country may be “sham marriages” aimed purely at circumventing immigration rules, one of the country’s main marriage registrars has warned.

This is the unchallenged anecdotal evidence (“10-15 per cent”) of one man, Dennis Prior, a superintendant registrar from the HSE. He calls sham marriages an “attack on marriage”. Which they are not. When they happen they usually involve people desperate to stay in the country (like the Irish in New York). Also an “Attack on marriage”? As if marriage was sleeping soundly when the Sham Marriages broke in.

And then there’s this:

But an increase in suspected sham marriages has been noted all over the country as non-EU nationals – typically from Pakistan and India – seek residency after marrying an EU citizen, according to Mr Prior.

Which means nothing, says nothing and does nothing except to cast doubt over any recent Irish civil ceremonies between Europeans and Indians/Pakistanis.

If the plans under consideration were implemented, couples could face more detailed questions, such as how they first met; if they lived together; what they had for breakfast; and to provide photographs of themselves together, said Mr Prior.

Still. the grammar is perfect.

We feel a lot better now getting that off our chests. Good morning.