More animated Taiwanese news from the funsters at NMA. This time it’s The Simpsons versus Fox News:

American TV cartoon The Simpsons has taken aim at its corporate sibling, Fox News, in a series of a jokes. The cartoon called Fox News the “No 1 news network for racists”. The jabs got to Fox News host Bill O’Reilly, who called those responsible for the attacks “pinheads”. The writers behind The Simpsons have taken shots at Fox News in the past, but never with so much vitriol. This has led some to speculate the 22-year-old cartoon is struggling to remain relevant. Owner Rupert Murdoch plays both sides of the fence, allowing edgy shows to flourish on this broadcast network while simultaneously promoting his own conservative views via his news channel.

Previously: The Irish Debt Crisis and The Wikileaks Scandal In 90 Seconds

This Is Your Simpsons On Drugs 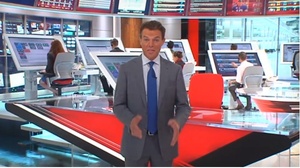