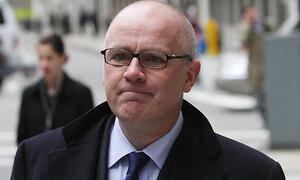 This morning we carried a post sourced to the Irish Times to the effect that David Drumm had paid no income tax while he was working at Anglo Irish Bank.

The Irish Times removed its item this afternoon, stating that it had “reported incorrectly that he [Mr Drumm] had paid almost no income tax during the period.” Adding: “The report was based on a misinterpretation of a Revenue document filed in a Boston court.”

We too have removed our posting.

We would like to apologise unreservedly to Mr Drumm and his family for any distress our report may have caused them.

As a mark of contrition, we have donated a sizable amount of money to be put behind the bar of O’Donoghue’s on Merrion Row, Dublin 2.

And we hope later this evening, if possible, to have a number of beverages in honour of the greedy, bald prick.

Why YOU Need To Bank With Metro Bank