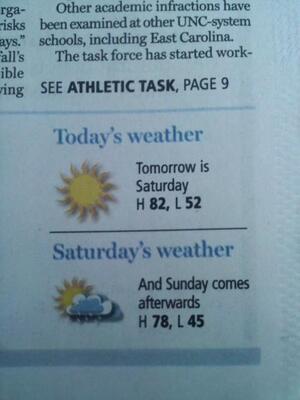 Unless some 14 year-old hasn’t already filled you in, here’s this:

The Rebecca Black saga in brief: Parents hire company to produce two cheesy pop songs and one cheesy video for 13-year-old daughter. Self-described “music factory” writes song including explanation of order of days of week. Daughter sings song. Producers auto-tune the bejesus out of it. “Music factory” unleashes song and promo on unsuspecting world. Video goes viral when critics trash it as “the most appalling thing on the Internet.” Girl complains of “cyber-bullying.” Then comes vindication. Gaga says she is a genius. Forbes declares her a millionaire.

Electric Picnic Weather Forecast Latest: It Could Go Either Way