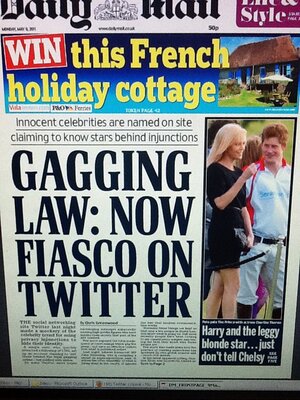 The identities of a string of celebrities who have taken out super-injunctions to protect their private lives have been exposed on Twitter.

In a direct breach of a slew of draconian court orders issued over the past few months, a blogger tweeted the names of celebrities to thousands of internet users.

The expose, by the blogger, who calls himself Super Injunction, became a ‘trending term’ on Twitter, which means it was one of the most talked-about subjects on the site.

However, the names of the stars and certain key facts that could reveal their identities have been replaced by the term ‘REDACTED’ – a legal term to describe the removal of sensitive material.