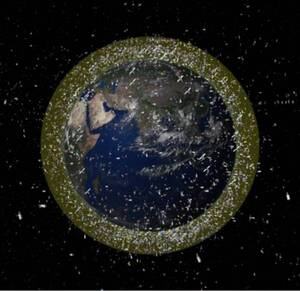 The graveyard of outer space – crowded with some 17,000 spent rocket stages, dead or dying satellites and countless crumbs of human-made orbital flotsam – is building toward critical mass, colliding, creating more debris. According to experts at the John Hopkins Space Department, it’s now inevitable that every satellite in orbit will be ‘percussively decommissioned’. According to Gen. William Shelton, commander of USAF Space Command:

“The traffic is increasing. We’ve now got over 50 nations that are participants in the space environment,” Shelton said last month during the Space Foundation’s 27th National Space Symposium. Given existing space situational awareness capabilities, over 20,000 objects are now tracked.

“We catalog those routinely and keep track of them. That number is projected to triple by 2030, and much of that is improved sensors, but some of that is increased traffic,” Shelton said. “Then if you think about it, there are probably 10 times more objects in space than we’re able to track with our sensor capability today. Those objects are untrackable … yet they are lethal to our space systems — to military space systems, civil space systems, commercial — no one’s immune from the threats that are in orbit today, just due to the traffic in space.”