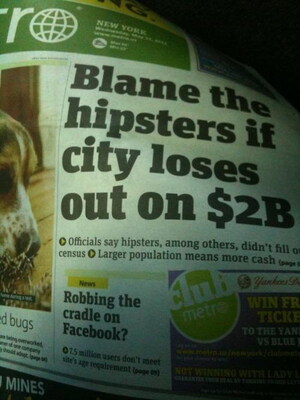 Everyone from doormen to hipsters may be to blame for New York City coming up short in the Census count this year — and they may have lost the city billions in federal funding.

New Yorkers slammed the 2010 Census when it was released in March. It showed there are only 8.1 million city residents, which city demographers say is far less than the 8.4 million people who actually live here.

Councilwoman Diana Reyna theorized that “hipsters” may be part of the cause for the inconsistency of the Census numbers, stating that some of them “only want to be counted in their home state.” She also added that they might not participate in the Census because it wouldn’t be “cool.”

Hipsters to blame for billions of dollars in Census losses? (Metro NY)

Your Motorised Monocycle Has Arrived