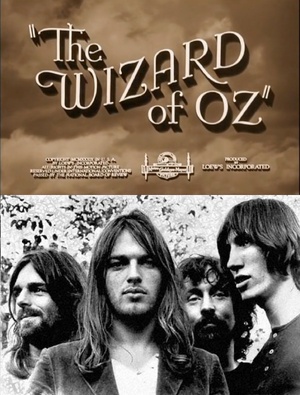 Since the 1970s, baked hippies have spoken in hushed tones of a legendary nexus point where Pink Floyd’s Dark Side of the Moon (1973) meets The Wizard of Oz (1939): the sound of the album matching seamlessly with the visuals of the movie.

This infamous syncing has been around for years and is also known as The Wizard of Floyd and The Dark Side of the Rainbow. Pink Floyd denies connection between the works but take a look, the synchronicities are sometimes eerie. It has also been performed as a live stage version by many theater groups such as Next Door Theater in Massachusetts and Fearnoart Entertainment in California.

Enjoy the 2007 mashup above, selflessly created for the betterment of the internets by Brooklyn sound engineer Bryan Pugh.

A Bookmark For Dorothy

Pogo: The Wizard Of Meh