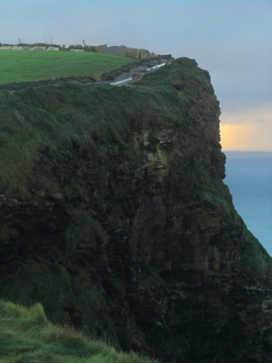 An Irish-American tourist has captured photos of an apparent apparition of Jesus Christ at the Cliffs of Moher.

Sandra Clifford, a pilot from San Francisco, captured the image on her digital camera when she visited the famous Co. Clare tourist attraction on November 4.

Clifford (42) and her friend Fiona Fay from Drogheda Co. Louth were spellbound by what they saw and immediately Clifford snapped the shot of what they said appeared to be the face of Jesus Christ. Fay first spotted what appeared to be an image of a man before pointing it out to Clifford.

“To me it was Jesus Christ straight away,” added Clifford, who is a practicing Catholic.