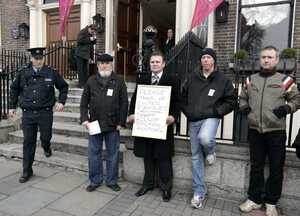 THE BRISK bidding and jovial atmosphere at the Allsop Space auction were interrupted when a protester heckled Allsop auctioneer Gary Murphy.

Tom McNulty, from the group calling itself the anti-eviction taskforce asked Murphy if he could guarantee that people in the room “won’t be buying ill will with their neighbours and from the people who can no longer afford to keep the property”. Speaking outside the auction room, McNulty said people often get caught up in the frenzy of cheap property and forget there is “a human side to many of these sales and that there are families suffering. Some buyers will be purchasing into communities where there will be nothing but ill will and trouble”.

Earlier, inside the auction room, auctioneer Gary Murphy from the UK-based Allsop had replied “Don’t bid then,” before thanking McNulty for his “kind words”. 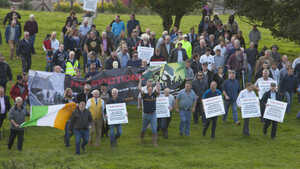