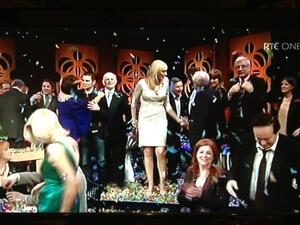 RTE’s New Year’s Eve programme, traditionally a ratings disaster, bucked the trend this year, attracting an average of 689,000 viewers and a 52pc audience share. As the clock struck midnight, just short of one million people tuned in. The average figures were nearly double the number a year earlier when Grainne Seoige hosted a New Year’s Eve special of the ‘All Ireland Talent Show’, which attracted 375,000 viewers and 31pc share.

“I was really worried because New Year’s Eve is a funny night,” Ms O’Callaghan revealed. “I knew it was a challenge but we turned something which had small viewers last year into mega viewers this year.”

Reeling In The Month