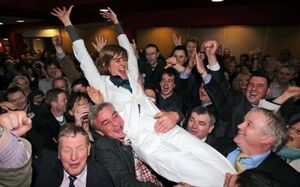 “Newly-elected Fine Gael TD Michelle Mulherin (above) claimed the most out of all the Mayo TDs, even though she only took office in February 2011. She claimed a total of €46,133.39 last year. From March to November 2011, Ms Mulherin claimed over €1,000 per week, which equates to over €300 more than the average weekly industrial wage in expenses alone. The average weekly industrial wage stands at €693 per week, according to the Central Statistic Office.