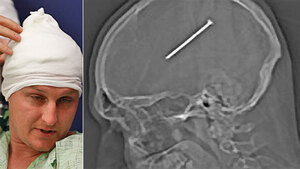 Autullo was recovering Friday after undergoing surgery at Advocate Christ Medical Center in Oak Lawn, where doctors removed the nail that came within millimeters of the part of the brain controlling motor function.

“When they brought in the picture, I said to the doctor `Is this a joke? Did you get that out of the doctors joke file?”‘ the 32-year-old recalled. “The doctor said `No man, that’s in your head.”‘

As he was rushed by ambulance to another hospital for surgery, he posted a picture of the X-ray on Facebook.

Autullo, who lives in Orland Park, said he was building a shed Tuesday and using the nail gun above his head when he fired it. With nothing to indicate that a nail hadn’t simply whizzed by his head, his long-time companion, Gail Glaenzer, cleaned the wound with peroxide.

“It really felt like I got punched on the side of the head,” he said, adding that he continued working. “I thought it went past my ear.”

Man shoots nail into his brain, posts it to Facebook from ambulance (LA Times)