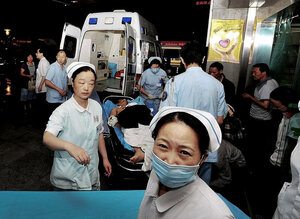 When workers in the cafeteria ran outside, they saw black smoke pouring from shattered windows. It came from the area where employees polished thousands of iPad cases a day.

Two people were killed immediately, and over a dozen others hurt. As the injured were rushed into ambulances, one in particular stood out. His features had been smeared by the blast, scrubbed by heat and violence until a mat of red and black had replaced his mouth and nose.

…Tuesday, Apple reported one of the most lucrative quarters of any corporation in history, with $13.06 billion in profits on $46.3 billion in sales. Its sales would have been even higher, executives said, if overseas factories had been able to produce more.

The iPad: 3 Decades Ago

We Have Ghost Estates: China Has Ghost Cities