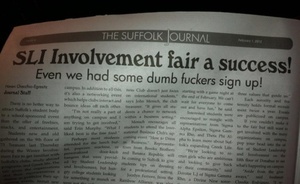 An apology for the above subhead featured in Wednesday’s Suffolk Journal:

In today’s issue of The Journal, we published an inappropriate sub-headline in the article “SLI Involvement Fair a success.” We want to apologize profusely for the mistake and make it clear that we in no way harbor ill feelings towards the Student Leadership and Involvement Office, nor any of the students and staff that work there.

The sub-head was put in as a joke, by editors, that unfortunately slipped through our editing process later in the night. We want to make it clear that the reporter who wrote the article had no idea or anything to do with the subhead.