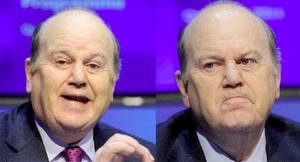 Feb. 9 (Bloomberg) — Ireland will seek to take advantage of any “arrangement” that Greece agrees with the European Central Bank on the country’s debt, as the government seeks help refinancing the bailout of the former Anglo Irish Bank Corp., Finance Minister Michael Noonan said.

“There’s a suggestion that there might be some arrangement made with the ECB,” Noonan said in an interview yesterday with Dublin-based broadcaster Today FM when questioned about Greece. “If that happens we’ll be watching it very closely and we’ll try to avail of that.”

Irish Will Try to Make Use of Any ECB-Greek Accord, Noonan Says (Bloomberg, 9th Feb)

On Today FM two days ago, the Minister referred to the possibility of an ECB “arrangement” for Greece and said “we’ll try to avail of that as well” if such a scheme went ahead.

Asked about such remarks, Mr Noonan said people had taken liberty to quote him as saying he might seek similar arrangements for Ireland as might be made for Greece but he insisted that was not what he said or meant. “What I did say yesterday was that we were negotiating an alternative to the promissory note and we will be watching very carefully the elements of the Greek programme to see if there was flexibility in the ECB.

“But under no circumstances was I saying that we’d be looking for something that Greece may get. I was simply saying that it might give us an opportunity to advance the separate negotiations that are ongoing on the promissory note.”

Debt Restructure: Apparently Not The Thing Germany Fears Most