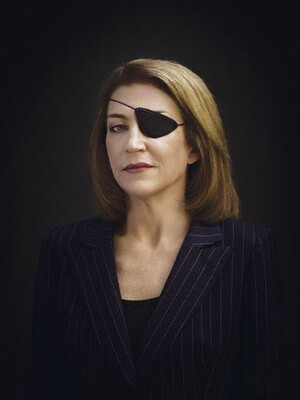 Marie Colvin, of the Sunday Times, who was killed in Syria, reporting on the bloodshed in Homs this week on CNN.

Throughout her career she has covered many conflicts around the globe, most recently Tunisia, Egypt and Libya in the grips of the Arab spring. Although her area of speciality is the Arab and Persian world, she has also worked in Chechnya, Kosovo, Sierra Leone and Sri Lanka, where she was injured in an ambush by government soldiers. She is a passionate advocate of on the frontline war reporting, stating “Our mission is to report the horrors of war with accuracy and without prejudice”. She has won the British press award for “Best Foreign Correspondent” twice, for her work in reporting the conflict in Yugoslavia, Iran, Sri Lanka and Zimbabwe; the International Women’s Media Foundation award for “Courage in Journalism” for her coverage of Kosovo and Chechnya, and the Foreign Press Association’s Journalist of the Year award.