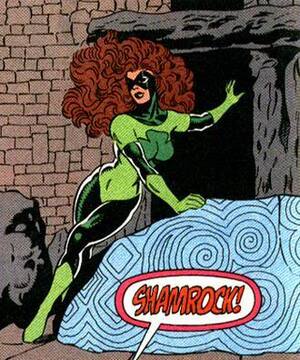 Further to our disputed item (see comments under that post) on Ireland’s first female superhero, Shamrock (above).

Turns out she wasn’t that super after all.

In 1982, Marvel set out to create a character that truly represented the pride and culture of Ireland, but instead they made this. Molly Fitzgerald was given “luck” powers and became the superhero known as Shamrock and she was as lame as she sounds. Though she supposedly has the real “luck of the Irish” as her super power, Marvel gave her a crap life. In one story she is even drugged by her own father, hoping to steal her powers – the shame. Later the character announced her retirement and became a hair dresser. They later brought her back to the Marvel Universe and she was then presented as having become overweight since retiring. Since Shamrock first made her appearance in Marvel Super-Heroes: Contest of Champions #1, she has been more of a filler for meeting a social quota then a true attempt at a culturally based character… and did I mention she is LAME?!!!

Superheroes As Flags Of The World