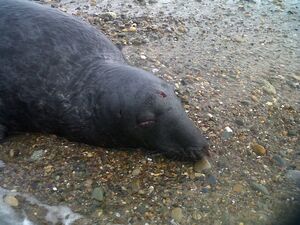 Two seals were discovered on Tramore Beach, Co Waterford (above) during the past 24 hours with gunshot wounds.

The Irish Seal Sanctuary was horrified to learn that adult grey seals were coming ashore dying from bullet wounds to their heads. The first, a mature bull seal had been shot with what appears to be a .22 bullet to the head. Had this been an authorised shooting under license from the NPWS [National Parks and Wildlife Service] it would have been shot with a weapon capable of  killing it outright.