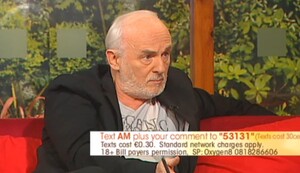 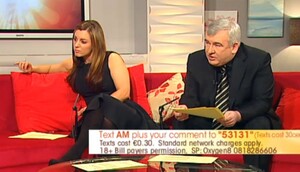 Dr. Tony Humphreys, author of that article (suggesting a link between parenting and autism) went on Ireland AM this morning to defend his claims and face unusually hostile questioning from presenters Sinead Desmond and Aidan Cooney.

Sinead Desmond: “I’m going to offer you initially a chance to apologise… Do you want to apologise for making that link [between parenting and autism]?”

Desmond: “You did specifically suggest that a lack of love could result in emotional difficulties which others refer to as autism… I know you have an issue with the label ‘autism’.”

Humphreys: “I have an issue with the label autism. I actually, I want to tell you something: I always had question about whether there was some genetic or biological basis to it…”

Desmond: “Lets go back to the parenting.”

Humphreys: “Yeah. I was discussing [Simon] Baron Cohen’s research there and I was wondering why did he look at the professions of parents who had children with autism right? And I was questioning why did he do that? Why did he need to do that, if he believed that autism is a biological problem? Why would he bother looking at people’s professions? And that’s where that arose from. I never – I mean I’ve been practising clinical psychology for 30 years; I’ve written 16 books right – in every single book I say this: no parent ever deliberately wants to block the progress of their child.”

Aidan Cooney: “Are you saying that subconsciously they want to block…”

Humphreys: “I think they’re not even unconsciously or subconsciously do they want to block it. Love is always present but come on, every one of us comes into our roles as marriage partners as friends in the workplace. My new book, Leadership With Consciousness, addresses the deep emotional processes that underlay the economic.”

Desmond: “I really want to pin you down, because…”

Cooney: “You can’t mind-read whatever way you dress it up. How come then there are parents who have one autistic child and two who aren’t? How is that possible?

Humphreys: “Well it’s very possible because each child has a different mother; each child has a different father. If you look at a family of five, if we meet as adults for a reunion and we begin to discuss the family of origin, you could swear to god you’re hearing about five different families, because each child responds in their own unique way to the parent or the teacher. It’s not just parents – teachers had huge influence on us. And the word is influence, the word is not blame.”

Desmond: “But whether you’re going to blame or influence, you are ultimately saying that parents and teachers are causing that child to become what we label as autistic.”

Desmond: “What causes autism then?”

Humphreys: “You see when you use the word autism you’re suggesting that it’s a fact. Autism is a theory, it is not a fact.”

Desmond: “I don’t want to get into that argument, I want to specifically…”

Humphreys: “But it’s an important argument.”

Desmond: “I understand that but what’s important is that, for parents, you have intimated that they have somehow caused their child to become autistic.”

Humphreys: “You see I didn’t use the word ‘cause’ right, and you’re putting words in my mouth. What I’m saying is that we all have emotional baggage; we inadvertently… if I have a parent who’s a perfectionist she developed that perfectionism as a child to withstand any possible…”

Humphreys: “But she’s not doing it consciously.”

Cooney: “OK so what you’re actually saying then is, never mind the child for the moment, let’s examine the parent’s issues. So the parent has to go through treatment. How do you unlock it otherwise? If the parent is carrying subconscious baggage…”

Humphreys: “When I work with children right, who are distressed right, I want to see what the child is communicating, because the child creatively creates their own way of communicating… it is a creative process that the child does. I mean I had one child whose parents were always fighting with each other. There was violence between them. He used to go under the stairs and sit in darkness for hours. He was protecting himself creatively, right. The parents didn’t realise they were having that effect. And if I got a hundred euros for every parent I have worked with that said ‘ I never realised that I was having that effect’.”

Desmond: “You’ve cited an extreme example of a violent relationship. Anybody who is allowing violence to be shown in front of their child should be very aware it’s going to have a damaging effect. But what we’re talking about are normal families. There’s no violence, there is nothing untoward going on. They have four or five children; one of them is autistic. As Aidan asked you, how can you explain that? They love them all the same.”

Humphreys: “Once two individuals interact it’s an individual relationship right. It’s a unique relationship. Every family is different and you do not know the complexities of any family from the outside in. But one of the things that is not being brought out here. I’m the messenger of what all the new research is saying.”

Cooney: “But some of those researchers have gone on radio and said you misquoted them. So why did they do that? Why did they say your article misrepresented them?”

Desmond: “So why are the parents of Ireland up in arms then?”

Humphreys: “Because of that misrepresentation.”

Desmond: “So they were not your words in the article in the [Irish] Examiner?”

Desmond: “But what was printed in the Examiner, they were your words, yes?”

Humphreys: “Of course they were.”

Desmond: “And those words have caused this upset?”

Humphreys: “No what is…the words that I printed in my article were misrepresented on radio.”

Humphreys: “Very interesting thing. Many people who came on the radio had not read the article.”

Humphreys: “This is not my bombshell. This is the bombshell of book after book that’s coming out. I wrote the article with good intentions, and the good intentions was to give information of the present understanding of autism. That was my intention.”

Cooney: “So why did two of the people that you quote rubbish your article?”

Humphreys: “No they didn’t rubbish the article; what they rubbished was the misrepresentation of my article which was that I talked about blaming parents. And I never in all my life have blamed parents. But I have been absolutely saddened by the response, because that was not the response I in any way expected. Can I read this to you? I need to do this…”

Humphreys: “That’s what all the new research is saying. Can I just read…”

Desmond: “Ah, so that’s what you believe? That a child’s relationships with those around it causes autism?”

Humphreys: “Yeah but what I’m believing is backed up now by research.”

Desmond: “I don’t want to talk about someone else’s book.”

Humphreys: “But my article was based on this book.”

Desmond: “What you’re saying is that a child’s relationships with those around them causes autism.”

Humphreys: “No what I’m saying is a child’s response to the defensive behaviour of parents – the child creates its own response; the parents create their own response at an unconscious level”

Desmond: “That’s exactly what I just said; a child’s relationship to those around them causes autism. That’s your belief?”

Humphreys: “No the child’s response to those around them, right? We know from the work…”

Desmond: “A child’s response to those around them causes autism.”

Humphreys: “You see I don’t believe in autism. It causes a child to become distressed…. People who are being told that their children are autistic are being told that they have – let me finish – a biologically-based, genetic disease. There is no evidence for that. And let me read Timimi because I need to do this.”

Humphreys: “But sure I know that and that’s why we have a whole group of researchers saying ‘there is not such a condition’.”

Cooney: “So all medical evidence is off the bet. All bets are off in medicine then. It’s all psychological.”

Humphreys: “Well that’s what the books are saying now. Can I just read this please?”

[He reads]: ‘When we first started on this journey…. we didn’t predict our final destination. We have been stunned at the absence of any real science that supports either the narrow or the broad construct of autism; shocked at the ease with which academics and professionals alike have accepted the validity of the diagnosis; and alarmed at the potential implications of large numbers being diagnosed with autism.’”

Desmond: “Your statement that a child’s response to those around them is what is causing autism as it’s labelled. Can you not see how that statement leads parents to feel that you are blaming them? Because that is what’s at the nub of this.”

Humphreys: “You’re putting words in my mouth. A child’s response to the inevitable issues self-esteem issues that parents carry with them, their response is unique to them. They try to defend themselves from…”

Desmond: “Can you not see how what you just said leads parents to feel as if you’re blaming them? Can you not see that Tony?  You can see it – do you understand it, yeah? Because you seem to miss it.”

Humphreys: “I’m not missing it.”

Desmond: “So you do understand why parents think…”

Humphreys: “Of course I understand but I’m not blaming them. But I’m saying the reality is that every one of us has emotional baggage and we influence and affect each other.”

Desmond: “We did ask if you if would have this discussion with a parent on the sofa with you and you said no, you wanted to be here on your own. Why?”

Humphreys: Because I don’t want to get into an argument with somebody, right, who… it must have been so upsetting to suddenly realise that researchers – not Tony Humphreys, but more and more researchers are saying autism… Listen to this [he reads]: ‘The conclusion of our studies is that there is no such thing as autism and the label should be abolished’.”

‘Gardaí Were Called, John Was Arrested, He Was Then Placed In The Homeless Shelter’