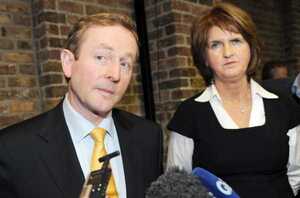 Speaking at the launch of the new Pathways To Work initiative yesterday:

Mr Kenny said the plan was about ensuring that when economic recovery came, those who lost their jobs in the recession were not left behind.

The aim is to get 75,000 long-term unemployed people back into the workforce by the end of 2015. Listing areas in which there are job opportunities, including IT, the meat industry and fishing, the Taoiseach warned: “In the 1990s we had a culture where there was an assumption that particular kinds of employment were off limits to Irish people, but that shouldn’t be so in the future.”

He cited the example of a nursing-home owner who told him she interviewed 24 Irish women for four jobs but none would accept the work at a rate of €10.50 an hour. As a result, the employer said she would be hiring four Polish women.

Can’t be having that.