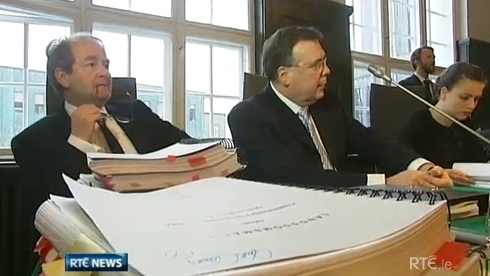 A report on the former Icelandic Prime Minister’s trial for “gross negligence” on last night’s Nine O’Clock news on RTE 1.

Eileen Dunne: “Iceland’s former Prime Minister has gone on trial, charged with negligence in relation to the financial crisis of 2008. His country’s top three banks collapsed during economic turmoil after years of debt-fuelled expansion.”

Video footage & voice over from Anthony Murnane: “From the Prime Minister’s office to this special courtroom in Reykjavik, Geir Haarde arrived here today knowing he could face two years behind bars. On his watch as Prime Minister, between 2006 and 2009, Iceland top three banks collapsed. Their balance sheets had grown to around nine times the size of the country’s economy. It had to borrow around $10 billion from the International Monetary Fund and other lenders.”
.
Footage from 2008 in which Haarde says: “Our primary concern is the sustainability  of the banking system, as well as the best interests of the Icelandic people.”
.
Footage and voice-over from Anthony Murnane: “Haarde is being prosecuted at the Court of Impeachment, set up in 1905. This is the first time its ever been used. He is charged with gross negligence and with failing to rein in the banks before the crisis. Haarde denies the charges, claiming political persecution. He told today’s hearing that no-one realised at the time that there was something fishy within the banking system itself. It wasn’t until the last few days before the collapse, he said, that anyone realised how interlinked they were and, by then, it was too late. Many Icelanders blame a small and closely-connected group of businessmen, bankers, and politicians for the crisis. Iceland’s economy which plunged into a deep recession has started to recover. It got its investment grade back from the ratings agency Fitch last month. The former Prime Minister’s trial is expected to last at least two weeks. A verdict is due by the summer.”
.
Watch here
.
Remember the Joke About Iceland And Ireland? (RTE) 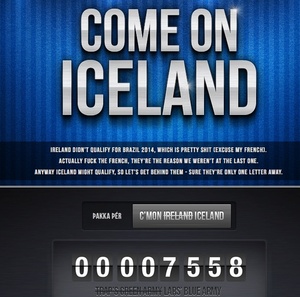 All Right Stop, Collaborate And Listen