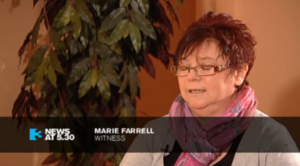 In an interview this evening with Paul Byrne of TV3 news, Maire Farrell, a key witness in the Sophie Toscan du Plantier murder case, claimed she was was forced to perjure herself by Gardai in order to incriminate Ian Bailey.

She had previously told a 2003 libel trial that she had seen Mr Bailey the night Ms. du Plantier died but retracted her evidence in 2005.

Paul Byrne: “Why did you make that statement, when you say that you knew it wasn’t Ian Bailey?”

Farrell: “Well, I panicked. Initially, I panicked because I had actually been out that night and I was somewhere where my husband didn’t know I was. I just thought the guards know what they’re talking about, there’s no way they’d say it was Ian Bailey if it wasn’t. And I just thought, I’ll do what they’re saying and that’s the end of it for me.”

Farrell: “Well between 1997 and the libel trial I had made, I had signed numerous statements. A lot of them I didn’t even know what was in them, I was just asked to sign statements. I found out afterwards you know that they had been saying Ian Bailey had been harassing me and all sorts of things like that and none of that was true. But the Gardai just kept putting more and more pressure on me. I was just getting in deeper and deeper and it was just like, getting out of control”

Byrne: “Moving along to 2003, the beginning of the libel trial – you received a subpoena to attend, how did you feel about that?”
.
Farrell: “For the whole week of that trial I kept saying, you know, that I wasn’t going. There was no way I was going to court. But I had certain Gardai ringing me, sometimes three or four times a day telling me that I had to go to the court. My husband was telling me I wasn’t to go. I was adamant I wasn’t going, I told them. There was no way I was going to court and telling lies. But then I got a phone call the day before I appeared at the libel trial, and a garda told me that if I didn’t go an application would be made to the court to have me arrested. He said “You’ll probably be brought there in handcuffs, which is worse.” So he said I had to meet a different garda that morning and that he’d run through everything with me and that I had nothing to worry about, stick to the story and there was nothing to worry about. So the morning that I did appear at the libel trial, I met a garda just outside Cork city. He told me what I had to say, and stick to it, and there would be no problems. When I got up on the stand I was panicking, and I was thinking ‘Will I tell the judge the truth here?’ and then I looked down to the back of the court and there was, you know, the Gardai standing there watching me with their arms folded and I thought, you know ‘I have no way out of this’, but at the same time I couldn’t remember what I was meant to say. So it was a relief then when that was over.”

Byrne: “Why did you go through with it?”

Farrell: “”Because I was being put under so much pressure from the Gardai.”

Byrne: “What was the breaking point for you when you decided to retract your statements? What made you do that?”
.
Farrell: “I got a phone call from a garda, and we were just talking in general and then he said to me that Sophie’s parents were taking a civil action against Ian Bailey for Sophie’s wrongful death. And he said: ‘You know that’s going to end up in court and you’re going to have to go in there again?’ And I said there is no way that I would ever, ever go to court and tell lies for the guards again. And I said, you know, if you keep pushing me now I’m going to go and see Frank Buttimer [Ian Bailey’s solicitor]. He said: ‘You know, no one is going to be interested in what you have to say.’ And I said, ‘You know, maybe Ian Bailey will be interested?’ And I said I’m going to tell them the whole truth about what happened. And he said “if you go down that road you will never again have a day’s peace as long as you live.”
.
Byrne: “Can we believe Marie Farrell?”
.
Farrell: “I know I’m telling you the truth. I did it because I knew it was the right thing to do. I had to come forward and tell the truth. I’ve gone through years of, I don’t know how to say it, harassment? Hardship? And stress. Because of doing the right thing. What I did in 1996, 1997 was stupid. I was naive. I really really thought that the guards could do no wrong.”