David McSavage on the Ray D’Arcy Show on Today FM this morning.

Comedy gold or your cash back

Ray D’Arcy: “Now good news for fans of the Savage Eye. It returns next Monday. That’s the 19th of March, which is a bank holiday. Is that going to affect the viewing figures David?”

D’Arcy: “People do things differently on a bank holiday you see?”

D’Arcy: ” Yeah I wasn’t expecting a…good answer to that question.”

McSavage: “I don’t know what the figures will be. Could it affect it adversely or positively?”

D’Arcy:  “Well that’s what I was asking? Will it affect it?”

McSavage: Will has that look in his eye that scares people.
D’Arcy: “So this is the third series?”

McSavage: “It is the third series.”

DM: Thank you very much, Ray, yeah. And I hope it’s good, you know, before these things go out, you never know, are they good? But I hope it is. I wouldn’t be…you know I’d feel superstitious to say ‘yeah, it’s going to be brilliant’. But I hope it’s…like we worked very hard on it. So I hope it’s good.”

D’Arcy: “Do you get a certain amount of satisfaction from, you know, being an outsider for so long. Like I remember the time..breaks out in laughter..when…sorry..regains composure… Mary McAleese invited the great and the good of the entertainment industry up to the Aras for a cup of tea.”

McSavage: “Oh that’s right and I was on the roundabout.”

D’Arcy: “And you were on the roundabout there in the Phoenix Park that leads up to the Aras and you were shouting abuse at everybody going in.”

D’Arcy: “And now look at you. You’re part of the establishment.”

D’Arcy: “Does it give you that sort of ‘two finger’ satisfaction.”

DM: Well you know we went through some difficult times and.. laughter..you know with therapy and everything. But now I’m much more grounded.

D’Arcy: Are ya? I don’t believe that because I can see into your eyes there. You know..

D’Arcy: “No, no..David was saying he was clairvoyant before we went on air. So I asked him to tell me what I was thinking.”

McSavage: “I love the way you’re talking to your audience collectively like one person..(adopts ‘mature’ voice) ‘Now hello..do you know something? David was telling me he’s clairvoyant now and he could look into my eyes and read my thoughts’.”

McSavage: “Mary Robinson..you have to sort of have a permanent grin and then you talk like that.”

D’Arcy: “I am really, ridiculously bad at accents and all that sort of..impersonations. It is all about…Cause Mario (Rosenstock) says it’s all about the shape of your mouth? Isn’t it? Isn’t that how you do it?”

McSavage: “Well I don’t really know. Mario is much better at accents than I am and the other fella, what’s his name…”

D’Arcy:  “You call her Maria Callous?”

McSavage: “No there’s people in there that do the promos. They do them quite well so we don’t have any say. I think we..they ask for three clips or something like that. And then we send them off…”

D’Arcy: Did I spot you doing Daithi O Se? As in impersonate him?

McSavage: “Oh no that was John Cleary. I was dressed as a Rose of Tralee.”

McSavage: “And it’s like how, why is the Rose of Tralee still existing? It’s such a sort of…”

McSavage: “It is kind of antiquated but it’s so bad it’s brilliant somehow.”

McSavage: “It is sort of embracing our smallness so maybe shows like that are quite good. Like it’s not pretentious, it’s not copying. Like a lot of format shows they copy British shows but this isn’t. There’s no show like it. So actually maybe it does serve a purpose.”

McSavage: “No I feel bad now for saying ‘it’s so bad it’s brilliant’.”

D’Arcy: You must be wracked with guilt about everything are ya?

McSavage: “No it’s just when I’m here, talking to you like I don’t know I’m such a shape-shifting type of person. Like outside here I’ll have a definite opinion and then when I sit with you and it’s like I just feel like not saying bad things.”

D’Arcy: ” And he’s back anyway. Your version of Joe Duffy is back.”

McSavage: “And you’re so good like. That you bring people on and you promote their tour date. Like that guy on before.”

McSavage: “That was a very nice song wasn’t it?

D’Arcy: “He’s coming back on there. Do you know Bressie?”

D’Arcy: “Well Bressie used to be the lead singer in…”

D’Arcy: “That’s right. He’s now one of the coaches on The Voice.”

D’Arcy: “Which is one of those ‘vote in formats’.”

D’Arcy: “Will there be more Joe Duffy on the new series?’Well if the promo is anything to go by…”

D’Arcy:  “Since we last spoke have you bumped into him at all?”

McSavage: “No I haven’t no. And I mean, like I said to you I think before, I mean I enjoy listening to the Joe Duffy Show because…”

D’Arcy: ” Because it gives you material.”

McSavage: “It’s human..I mean it’s quite an entertaining show and that’s it. I mean I think sometimes it has a social function to it. But I think in general, he’d probably agree, it is an entertainment show.”

D’Arcy: Well that’s..the two things I think that go through his mind as he walks into the studio..maybe I’m misquoting him now..something about legal – make sure he doesn’t break any laws and the other one is about entertainment. They’re the two things that are ringing in his ears.

McSavage: “You see if someone rings up and they sound confident and independent, his voice tends to have a harsh tone to it. But if somebody is really in need of help and you know sounds bate down by life the tone or the tamber of his voice..he does get..assumes his Joe Duffy voice…very, you know, like that. And so…”

D’Arcy: “But that’s empathy I suppose…(laughs)”

D’Arcy: “Will you explain because the only place you can explain is here because it’s not an RTE show. There was a bit of controversy over the Brendan O’Connor Saturday Night Show. You were meant to go on and you were pulled at the last minute. Was that what happened?”

McSavage: “Yes, I was doing a rehearsal and I was doing a piece that would normally have a context within my stand-up and also I was performing to, there was nobody there, I was just..but Larry Masterson, he’s a good mate. Sort of. He ran down to me and said ‘sure that’s shite’. He said ‘You can’t be doing that. Sure we’d be doing you a disservice if we let you on’.”

McSavage: “Yeah, he said..what did he say..it was very good of him..’we’d be doing you a disservice’..and this is me, you know, an hour before going on air with Brendan O’Scaryface..and then he said ‘Do you have any more material?’ And I said ‘I don’t feel that confident right now’.”

McSavage: “And he said ‘will we knock it on the head?’ And I said ‘let’s do that then. Let’s go for that option’.”

D’Arcy: So how did they ‘plug your hole’ so to speak? Like the gap that you left..how did they plug that?

D’Arcy: ” They just extended the other interviews?”

McSavage: “They extended the other interviews.”

D’Arcy: “And were you supposed to be in chat or just stand-up?

McSavage: “No. I think the first invitation was chat. But then because I didn’t agree to go in to do a pre-interview they panicked a bit and said ‘well just do stand-up then’. And then it was supposed to be five minutes and then it was four minutes, and then it was three minutes. And then it was..assumes country accent.. like ‘would you just stand over there in the corner and wave?’ So you know it was like, you know, ‘just don’t talk. don’t look at the camera directly cause you’ll scare Mary. O’Shea. So I don’t know. Yeah.”

McSavage: “He went out with a Rose of Tralee didn’t he?”

D’Arcy: Well yeah it’s on and off..that’s how it’s described in the tabloids every time they’re photographed together. ‘On and off relationship’. Aoibhinn Ní Shúilleabháin. She’s a lovely girl.

McSavage: “And did she win the Rose of Tralee?”

D’Arcy: She won it yeah.

D’Arcy: “Yeah no I’m just stating it for the listeners. But would that not be easier then to get on the Late Late. Would you not ring him and go ‘Ryan, old couso of mine…'”

McSavage: “I don’t..I mean there’s a kind of a…maybe he’d be fearful that I’d say something about his personal life, which I don’t really know about anyway. And because he has that fear then I feel…maybe I will then. You know what I mean? Just because I’m quite a contrary…No but I’m not like that..no. But I would like to go on and…I don’t know, Ray.”

McSavage: Have you ever thought of hosting the Late Late Show?

D’Arcy: “No. Thought about it? No. Not really. Seriously no. Like obviously when you say something like that to me, it does enter my brain and I think about it momentarily but I haven’t thought about it long term, no.”

McSavage: “I think probably..I can’t imagine..I don’t know how long the Late Late Show will run for? I don’t know..maybe it will…”

D’Arcy: “Yeah it’s an ongoing debate in our house. We’ve very boring lives. We’re usually in on a Friday night and Jenny thinks that it’s outmoded. And, nothing to do with anybody involved, it’s just that the whole format is outdated. I disagree most of the time because I think, again, because it’s..same reason that the Rose of Tralee works. We’re different, we’re a small country so I think to have something unique to us, where we can have real chats about important issues, aswell as having the laugh that’s..I think that’s good.”

McSavage: “Yeah. What’s the other one…Winning Streak. Like I think that is actually embracing the smallness of Ireland. You know, i like the people from the country coming up with the cards. And saying ‘go on the mommy’, who probably..You know there’s something very rural…”

D’Arcy: ” Isn’t there something very endearing when the son is doing it for the mother because she can’t ..assumes country mother accent..’Oh I wouldn’t be able to go on the telly at all’.”

D’Arcy: And she waves from the audience.

McSavage: ” It’s kind of like..I went up to the Ploughing Championships.”

McSavage: “No I did not. But like when people from the country are in Dublin they try to sort of go under the radar and not be as country. But in the Ploughing Championships you just felt they let it all hang out. ‘I am fully..'”

McSavage: “‘…from country’. And that’s what I kind of like about the eh..what’s that one called?”

McSavage: “Winning Streak. And that’s who we are. We’re not British. We’re Irish.”

D’Arcy: “But we’re not all country and that’s the challenge for any programme.”

McSavage: ” I’m very in touch with my inner country.” 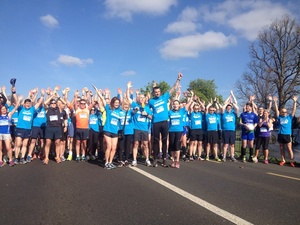 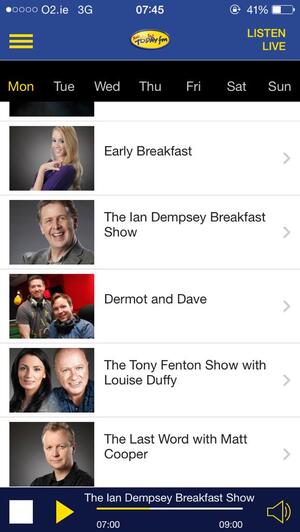 Without So Much As A By Your Leave