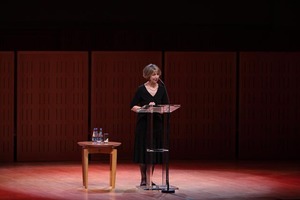 “I paid my household charge early last week. Just as well I did, because if I’d been listening to Big Phil blustering on the radio on Sunday, I might have been tempted not to. Almost all on his own, Hogan is fast generating for this Government what destroyed the last one – an air of bullying incompetence. It’s a crying shame because there was a really important job of political work to be done here – a widened tax base, which includes annual property taxes, is an essential reform and might have played an important part in dampening the property boom. The problem with introducing that reform is that Irish people have resisted property taxes fiercely for decades. They were bound to resist this one. So they needed to be firmly encouraged, exhorted, guided, given no excuse. Hogan has managed to give them every excuse.

First, he hasn’t got the information out. I didn’t get an information leaflet telling me how much or how to pay. I didn’t get a demand. Almost half the people I contacted for this column didn’t get one either. Was there a radio or television campaign? Seemingly they’ve had a radio ad in the last two weeks. I haven’t heard it. We’ve heard excuses about printing firms going bust and distribution firms not doing their job. Well, all I can say is, if it was Phil Hogan’s election campaign, he’d make sure by hook or by crook that there was a leaflet in every door.

Secondly, he hasn’t made it easy to pay. Not everybody has a computer to pay online. You’ve got to go and collect the form if you want to post the payment. And what about paying at your county or city council offices? Well, a man on Joe Duffy today said when he tried to pay in council offices in Arklow he was told they had no facilities to accept payment.
Thirdly, because the minister hasn’t ensured that the information is out there lots of people are beginning to think that the Government isn’t serious.
“I’m holding off until the very last minute because the Government might back off,” said one person to me this morning.
And where might people get that idea?
From Phil’s backing off on the Septic Tank Registration Charge, that’s where.
Fourthly, because the minister has allowed a general air of confusion to develop. Recalcitrance is growing.
And the growing numbers are making people feel safer. One man said on the radio yesterday “They’ll bring us to court. Can they really bring 80% of us to court?”
It’s a disaster and this is what happens when a minister looks incompetent. He loses authority. People start to question what he says and Phil coming on the radio and blustering that he’ll hunt us all down through our electricity bills and gas bills’ doesn’t impress anyone.
He’s shown fatal weakness once on the Septic Tank issue and allowed Mattie McGrath to claim an easy victory.
Indeed a raggle taggle group of Independent and Socialist deputies have done a better propaganda job on this issue using local meetings and local radio than has the minister and his Government with its massive majority and all its national might.
You know, people have been asking abroad about whether the great public backlash to austerity measures was going to come in Ireland? Why we weren’t marching in the streets?
Well, the streets isn’t really our tradition. We do things at local level, at parish meetings and local gatherings and this is where this particular battle is being fought and lost. This need not have been the protest issue around which a beleaguered people gathered. But Phil Hogan’s fumbling may make it so.
Enda Kenny is, quite rightly, strutting his stuff on the biggest international stage [yesterday’s White House visit] there is today. And the man who helped to put him there Phil Hogan, is undermining the credibility of his Governmental home because he didn’t do his homework. If the Government doesn’t get a high enough level of compliance on this tax what happens to the graduated property tax to come in next year. and if it fails on this issue what happens to the referendum on the Fiscal Compact? What happens to the referendum on Children’s Rights?
There’s a crisis of authority happening here. A question mark over the Government’s already limited ability to govern.
Mr Kenny may need to look to his Cabinet and remove that question mark sooner than he thinks.”