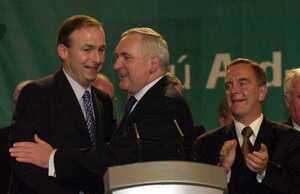 From a statement tonight by Fianna Fail leader Michael Martin via Politico.ie:

Although the central allegation against Bertie Ahern was not sustained, the evidence confirmed by the Tribunal and its comments relating to him are extremely serious.  The receipt by a senior office holder of large amounts of money which a sworn Tribunal has held is of unclear origins and the failure to give any credible explanation requires an unequivocal response.  No matter how high a member rises within the party and in elected office, they still carry a duty of trust for the members of Fianna Fáil and for the people who elected them.

The report records that Bertie Ahern gave a significant amount of evidence to the Tribunal which, in the opinion of the Tribunal, was untrue.

It is a matter of profound personal and professional regret to see confirmed in this Report the extent to which Bertie Ahern fell short of the standard of personal behaviour which is expected of the holders of high office. In the manner in which he received this money while holding high office and in the giving of rejected evidence to a sworn tribunal Bertie Ahern betrayed the trust placed in him by this country and this party.

I, together with the party’s officers with whom I have met and consulted, believe the conduct of Bertie Ahern as outlined in the evidence made public through the Tribunal and the findings of the Tribunal constitute conduct unbecoming a member of Fianna Fáil.  Accordingly, I will propose a motion to expel him as a member of Fianna Fáil at the special meeting of National Executive.  We are writing to Mr Ahern to inform him of this decision.

That NEW Bertie News Of The World Ad

Ahead Of His Time 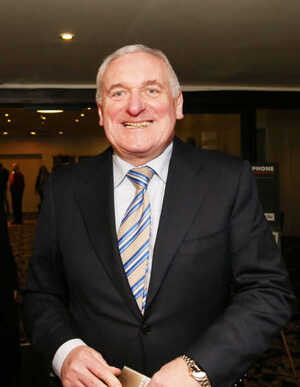