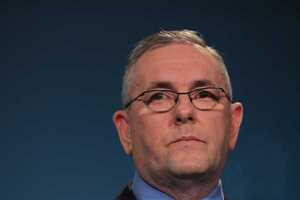 A statement from Sean Kenny TD:

The Dublin North East Labour Party TD and former Dublin City Councillor, Seán Kenny, has called on John McGuinness (above) Fianna Fáil TD and Chairman of the Public Accounts Committee to step aside over his lobbying for the Cargobridge Consortium.

“Fianna Fáil Deputy John McGuinness, then a member of Kilkenny County Council, made direct representation by letter to the then Taoiseach, Albert Reynolds, in relation to allowing the consortium to access the site over the lands owned by Minister for Transport. Deputy McGuinness’s brother, Mr. Michael McGuinness was a director of Neptune Freight. The Mahon report says that Michael McGuinness gave £10,000 in cash to Frank Dunlop in the knowledge that at least part of the money would be used for corrupt purposes.”

“The report also states that Mr. Michael McGuinness refused to attend the tribunal to give evidence. Deputy McGuinness recently made trenchant criticism of the Mahon Tribunal on its publication particularly in relation to the tribunal costs. At the same time he neglected to mention his own intervention in the Cargobridge affair, referred to in the Mahon report and I believe he is hypocritical in this regard. Deputy McGuinness is currently Chairman of the Public Accounts Committee. Regretfully, Deputy John McGuinness failed to address his involvement with the Cargobridge affair during his earlier contribution in the Dáil today. I would call on Deputy John McGuinness to step aside as Chairman of the Public Accounts committee in the light of the Mahon Tribunal account of his involvement in the Cargobridge affair.”

“It is absolutely imperative that we have open and transparent public representatives working to represent the people of this country. The Mahon Report shows just how society is damaged when that does not happen. John McGuinness has, I believe, shown himself to be the opposite of open and transparent. It is for that reason that he should resign as Chairman of the Public Accounts Committee. He did not act in the public interest when he lobbied for his brother, and I believe that he cannot be trusted to act in the public interest any longer.”