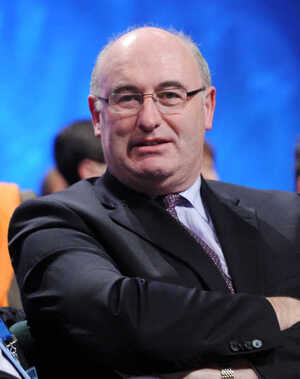 This dude is priceless.

MINISTER Phil Hogan’s controversial text to a woman in his constituency is being probed by the Taoiseach, the Irish Sun can reveal. The campaigner lodged a complaint with Enda Kenny’s office after embattled Environment honcho Hogan sent a smug text brushing off household-charge fears. The Kilkenny woman told how kids are going hungry as cash-strapped families scrimp to pay the hated €100 tax. But she was stunned when a reply from Hogan’s personal mobile said: “Would u ever relax. And feed the children.”

Enda To Probe ‘Rude’ Text By Hapless Hogan (The Sun)

Previously Hogan To Elderly Lady: “I Have No Problem Screwing You…”

Intro Of The Day