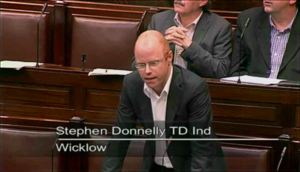 “Today, while rural schools are threatened with the loss of teachers and new figures reveal that 200,000 children in Ireland are living in poverty, €1.5 billion will be paid over to anonymous, unsecured, unguaranteed senior bondholders at AIB.

That’s €1,100 per household in the country – or 11 times the Household Charge. And the real tragedy is, this isn’t even ‘news’.

Think of the acres of coverage given to the Household Charge. And yet there’s been hardly a murmur about this €1.5 billion bond payment. Why? Because many in the media have clearly accepted that this government is going to pay back debts that we don’t owe.

This government came in on a wave of promises to negotiate hard to get write downs on this debt. They had a mandate from the people to do so. Major capitalists, like George Soros, said the bond holders should take losses. The IMF has said unsecured bondholders could take losses. But the government’s negotiating strategy, instead, has been to do whatever the ECB and the bondholders wanted.

Some believe that we are liable to pay these bonds because AIB is a state-owned bank. However, these are debts incurred by professional investors which have no sovereign guarantee and which occurred before the state took control of the bank. Therefore we have no moral obligation to pay them whatsoever.

Not only has the government not sought to negotiate with the bondholders, it has not even tried to find out who they are. The Minister for Finance, Michael Noonan, confirmed to me that they have not sought to identify the bondholders, yet in opposition not only did he demand their identity but he provided the late Brian Lenihan with the website where the bondholder information could be found.

The Government said its negotiating strategy had moved on to the promissory notes. But a substantive deal on promissory notes hasn’t happened – all we got was a one-year deferral that’s going to cost us an additional €90 million.

AIB has been recapitalised by the citizens of this country to the tune of €20.7 billion. We own 98.8% of it. Without our aid, AIB would be bust. AIB got to this point because it pursued a reckless lending strategy. Its bondholders facilitated that – they lent recklessly to AIB. And yet those bondholders have taken no losses on those bonds, and the Government – this one and the last – has consistently boasted that no bondholders would be burnt.

Whilst accepting that there are no easy decisions on this issue, and that the ECB is applying very significant pressure for Irish citizens to cover the losses of private investors, it is galling that this bond is being paid, and it is a tragedy that the media seems so reconciled to the fact that it is being paid.

It may not be feasible to renegotiate today’s bond payment, but a focus on it, and on the immorality of these anonymous, unguaranteed bondholders being paid billions at the expense of the Irish people, could at least lay the ground for some genuine, hard negotiations prior to the next bond payment due.”

A Lot Of Birdseed

How Much Are We Giving UNSECURED AIB Bondholders Today?