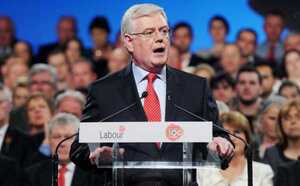 “I will not exaggerate our achievements, nor will I underestimate what is yet to be done.  Neither will I ignore what has been left undone, or done badly, but in difficult times we can report progress.
The economy is growing again. Small growth, but the first growth we have seen for almost 4 years.”

Eamon Gilmore, at the Labour Party conference in Galway.

Ireland’s economy probably shrank for a third consecutive quarter in the first three months of this year, said Michael Saunders, head of European economics at Citigroup Inc. in London. He expects the Irish economy to contract this year and that missed fiscal targets and weaker growth may require the country to seek a second bailout.

“We have renegotiated the EU/IMF deal; got the interest rate reduced and replaced the crippling Anglo Promissory note this year with a long term bond.”

Because the ECB have fully achieved their goal — getting a full €3.1 billion ELA repayment — calling this “a deal” with the ECB is hardly appropriate. Rather, it represents an arrangement with a privately-owned Irish bank that maintains the appearance of some sort of deal having been agreed with the ECB.