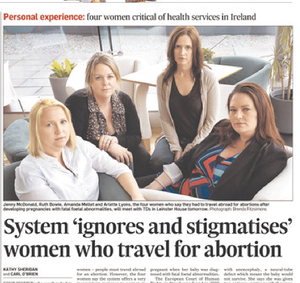 The photograph of the four calm, young women on this [Irish Times cover] page tells us little of what had gone before…Only hours before, each was still deciding whether to appear in this picture.
In the end, they did it because they want people to see how ordinary they are…Their sole bond was the fact that each had had a pregnancy in which the baby was diagnosed with “an abnormality incompatible with life”, and that each had “travelled” to have that pregnancy terminated.

‘I Believe In A Loving God And That I Won’t Be Damned For What I Did’ (Kathy Sheridan, Carl O’Brien, Irish Times)