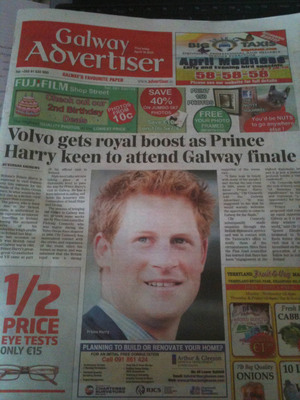 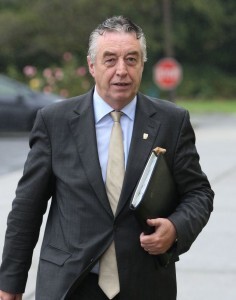 So, Harry’s on his way to Galway?

“I have kept in touch with many of the people I met during the last event  [Volvo Ocean Race] in 2009, some of whom know Prince Harry personally,” [Fine Gael Councillor Padraig] Conneely (above) told the Galway Advertiser. “It was suggested to me that he would warmly welcome the opportunity to come to Galway for the finale.” Cllr Conneely subsequently made enquiries through the British diplomatic service and was in contact with the Taoiseach’s office to notify them of the circumstances. Since then the Fine Gael councillor has learned that there has been “engagement at the highest diplomatic level, and it is just a matter of protocol before a visit is confirmed”.

However, Rival paper, the Galway City Tribune, contacted Buckingham Palace today and it appears Cllr Conneely is the excitable victim of a royal hoax. The Advertiser exclusive, we understand, was based not so much on discussions “at the highest diplomatic level” but apparently on correspondence containing “a fake letterhead”. Ouch.

Should I Stay Or Should I Go