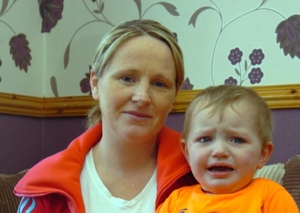 Serinna Corbett (above with son, Brian), a mother of four young children, told this week’s Limerick Leader of her campaign – across Facebook – to get re-housed.

She currently shares a three-bedroom council house with her four young children in Moyross, Co Limerick.

But, according to blogger Bock the Robber, Serinna is another example he (contentiously) argues of a growing culture of entitlement. The other being a certain couple from Killiney.

What do a millionaire Killiney couple and an unemployed Moyross mother of four have in common?  Not much, you might imagine, until you compare the demands they make and their complete blindness to the notion of personal responsibility.

…Serinna thinks her living conditions are beyond human endurance.  Having a 13 year old, and an 18-month-old sleeping in the same room is just wrong. It’s just not on. She wants a bigger house from the council.

According to Serinna, the 13-year-old has ADHD, which she says causes fits and hallucinations. (It doesn’t).  He might wake up in the middle of the night and attack the baby, she says.  Oddly, the obvious solution doesn’t seem to occur to her: bring the baby into your own bedroom.  No.  The baby must sleep in a place where he faces danger, just as the other children have done for five years now….

…Serinna’s clincher is this: there’s another baby on the way.  You have to stand back and think about this for a minute.  Another child on the way?  Well, how the hell did that happen?  Did a postcard arrive through the letterbox?  Hi, future mother.  See you soon.  Best wishes, Your New Baby.

When The World Owes You A Living (Bock the Robber)