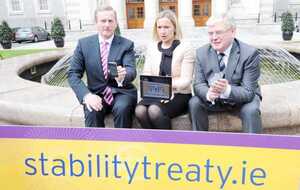 CAMPAIGNING BY the Coalition parties on the fiscal treaty referendum will be ramped up today amid warnings from a senior Fine Gael figure that the Yes side is facing a “difficult engagement” with the electorate.

Minister for Communications Pat Rabbitte said the International Monetary Fund “will not come to the rescue of any member state of the European Union, only in partnership with the ESM”.

However, Sinn Féin’s Peadar Tóibín, citing a story in a Sunday newspaper, said Ireland would not be isolated from funding [from the IMF}  if it voted against the treaty.

“If they would not let Anglo Irish Bank fail, they’re not going to let this State fail,” he said.