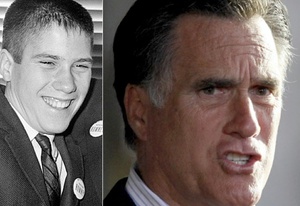 Alarming but not terribly surprising testimonial from former classmates of Republican presidential candidate Mitt Romney in the Washington Post:

John Lauber, a soft-spoken new student one year behind Romney, was perpetually teased for his nonconformity and presumed homosexuality. Now he was walking around the all-boys school with bleached-blond hair that draped over one eye, and Romney wasn’t having it.

“He can’t look like that. That’s wrong. Just look at him!” an incensed Romney told Matthew Friedemann, his close friend in the Stevens Hall dorm, according to Friedemann’s recollection. Mitt, the teenage son of Michigan Gov. George Romney, kept complaining about Lauber’s look, Friedemann recalled.

With help from other bullies, according to the article, Romney then pinned Lauber (who died in 2004) to the ground, and while the young man was weeping, cut off his hair with scissors.

ABC News also interviewed school friends of Romney, one of whom described his behavior as “like Lord of the Flies.” Romney apologized for the “prank” in a radio interview today, but said that “homosexuality” was never on his mind. 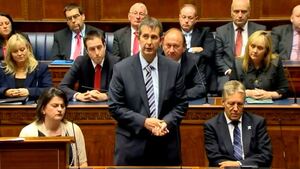 There’s Poots As Queer As Folk