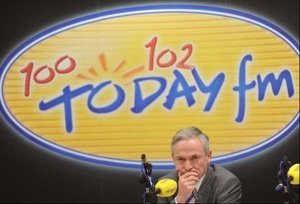 Matt Cooper: “Just imagine that the decision of the Irish people is ‘no’ – what
are you going to say to your counterparts in Europe?”

Cooper: “Are you suggesting that if there is a no vote, this government
will seek to rerun the referendum?”

Bruton: “No I’m saying that we will have a crisis on our hands and we will face a really difficult situation in funding ourselves, that is the reality.”

A government spokesman later said there would be no second vote.

Browne And The Bruton Brouhaha