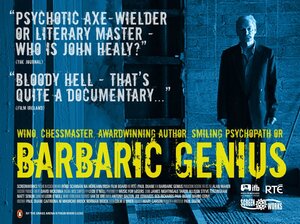 Five things you need to know:

1. Barbaric Genius is a documentary about London-Irish author, chessmaster and troubled soul John Healy, author of The Grass Arena, a seminal autobiography that you need to track down immediately. Now, that’s what we call a summer read.

3. A truncated take on Barbaric Genius ran on RTE a few months back – this is the feature length version. It’s better. In fact, it’s the best Irish documentary of 2012.

No cash, favours, etc were given for this post