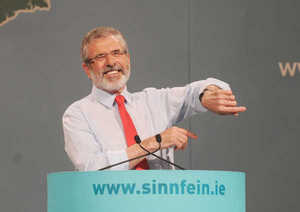 Gerry Adams on the fiscal treaty during his address to the Sinn Fein Ard Fheis in Killarney this evening.

When considering what way to vote people need to ask themselves if the austerity of recent budgets led to jobs and growth? The answer is obvious. The answer is no.
If you accept that, you should vote No.
Austerity isn’t working now and won’t start working on 1st June.
Neither will it bring stability or certainty.
Austerity means more cuts.And increased charges.
Right now if you do not like the policies of the government you can sack them or re-elect them.You won’t be able to do that with unelected, unaccountable bureaucrats in Frankfurt and Brussels.
That is undemocratic.
Don’t give up your power.
Don’t give your democratic rights away.
And don’t write austerity into the constitution.
Fine Gael, Labour and Fianna Fáil have not offered any positive arguments in favour of this Treaty.
The Taoiseach won’t even debate the issue!
That’s not leadership!
That’s not showing citizens the respect they deserve!
Instead Mr. Kenny, Mr. Gilmore and Mr. Martin are trying to scare people into voting Yes.
Whether it was British rule or a domineering church hierarchy, Irish citizens have had enough of being ruled by fear.
We are done with that.
The Irish government is also out of step with the rest of Europe.
Other EU states are delaying ratification because they know the mood in Europe is changing.
But not our government.
They settled for much less than anyone else, despite Sinn Féin’s clear warning about the foolishness of accepting this bad Treaty.
When the Taoiseach endorsed it in the Dáil he never mentioned growth or jobs.
Not once!
Or a write down of Bank debt.
The truth is Mr. Kenny and Mr. Gilmore are out of their depth.
This Government simply cannot be trusted on this Treaty.
It claims we will be locked out of funds if citizens vote NO.
That’s not true!The legal mandate of the ESM is very clear.
Funding will be provided, and I quote, where it is ‘indispensable to safeguard the financial stability of the euro area as a whole and of its Member States.”
So don’t be fooled.
Remember what Fine Gael and Labour said during the election.
Remember all Fianna Fáil’s promises.
Don’t be fooled. Be wise.
Join with the millions across Europe who are demanding an end to austerity.
It is a good and patriotic and positive action to say NO to a Treaty that is bad for you, bad for your family and community, bad for society and entirely without any social or economic merit.
Next Thursday. Vote No..

Adams: Don’t be fooled by treaty Yes side (Irish Examiner) 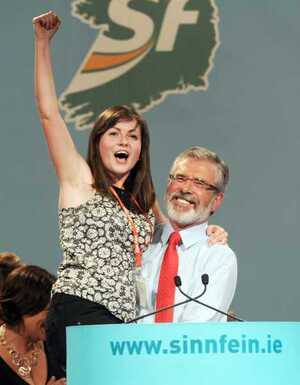 With Senator Kathryn Reilly following the address. She does enjoy being picked up.