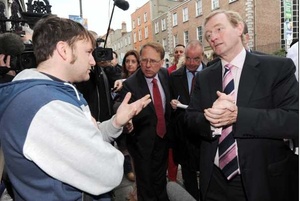 ‘No’ voter Karl Murdiff refuses to budge under intense and sustained múinteoiring from Enda outside Pearse Street Station, Dublin, this morning.

Dude was just trying to go to work.

UPDATE: Meanwhile, from C4’s Michael Crick (he’s the guy in the middle of the pix above): Dreadful campaigning by Irish PM Enda Kenny. Stands at Pearse station beneath No poster, lets commuters pass without greeting them

Enda Kenny seemed so reluctant to talk to commuters, that I started introducing them to him

A Message from Finland