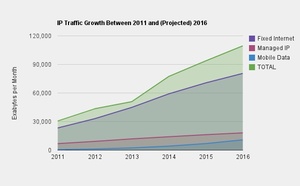 Cisco this week released its Visual Networking Index – a report that tracks internet traffic patterns around the world.

It predicts, among other things, that internet traffic will surpass 1.3 zettabytes (one trillion gigabytes) by 2016.

But the biggest story here, as it increasingly will be, is mobile. Mobile traffic will rise steadily and explosively over the next four years, Cisco projects. While the compound annual growth rates (CAGR) for fixed Internet and managed IP hover at 28 percent and 21 percent, respectively … Cisco expects that the CAGR for mobile data will be a whopping 78 percent by 2016. The Internet, increasingly, will be portable.

MORE: The Future Growth of the Internet, in One Chart (and One Graph) (The Atlantic)

You Know, For Kids…

Anything Good In The Farmers Journal?