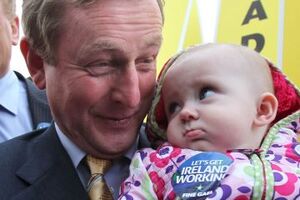 As he fought the general election, he vowed to avoid constituency work for 100 days and focus on bringing Ireland back from the brink.

In office, however, Taoiseach Enda Kenny has found plenty of time for the local circuit, taking part in a jaw-dropping 142 launches, openings, and other Mayo-related events since coming to power.

Mr Kenny’s diary reveals how, when not abroad, the Taoiseach has often attended more than half a dozen local events in a single day.

Aside from launches, he’s also had time for at least 100 constituency meetings, the exact details of which have been censored from official records seen by the Irish Mail on Sunday.