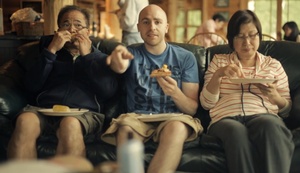 This is an engagement video.

A friend of mine from Connemara got engaged in Canada last week and made an engagement video with his Fiance’s family in Canada to the tune of Snoop Dogg’s “Ain’t Nuthin But A G Thang’,

His name is Henry Shepard, he’s from Clifden and we went to school together in Clifden Community School. He has been with his girlfriend Joanie from Canada for about 6 years and proposed last week.

They have a company based in Canada called Henjo Films, and they made the video with her family for the laugh, and posted it on his Facebook page. Compared to some of the other “stuff” that goes viral, I genuinely thought this one merits a viral take off.”