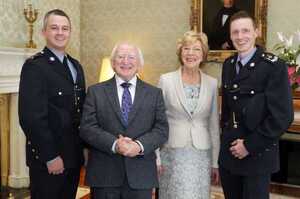 G-Force Garda Niall O’Connor (left) and Sgt. Paul Franey, Vice President of the European Gay Police Association with the President and Sabina Higgins at Aras an Uachtarain on Thursday.

A sizeable contingent of the EGPA will march in uniform at the  Pride celebrations tomorrow while their Garda colleagues march in plain clothes.A spokesperson for the Garda press office said yesterday that officers attending Pride were off duty and as such were prohibited from wearing uniforms. The policy contrasts with usual practice in Britain and across Europe where police officers have been wearing uniforms in such marches for much of the past decade.

The Gardaí And The Drug Dealer

She Disney Normally Do This