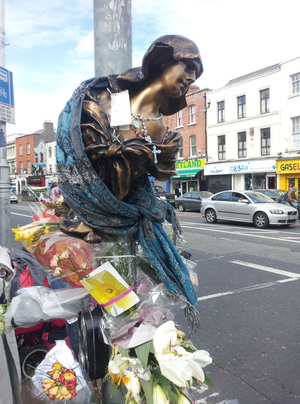 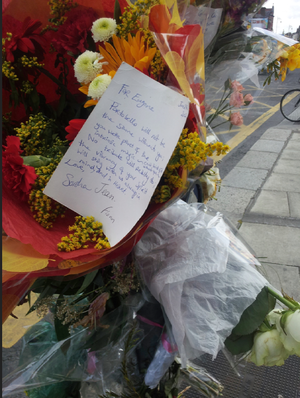 Tributes to Eugene Maloney on Camden Street, Dublin, where the Belfast-raised  journalist died last week, left by his neighbours from nearby Portobello.

I knew Eugene, not personally, but a few times in Wall and Keogh Tea on South Richmond Street we chatted about music, Vietnam, the media, and loving the life out of Portobello. Who knew this area would be his death bed? So, so sad. Ireland needs to debate alcohol, violence, and tolerance and respond maturely. And sad to see this (above), but what a tribute from the community who loved him.

Previously: He Was A Friend Of Mine

Removal on Monday, 2nd July, from Corrigan and Sons Funeral Home, 5 Lower Camden Street to the Church of Our Lady Queen of Peace, Merrion Road (opposite St. Vincent’s Hospital), arriving at 5.30pm. The funeral mass will be on Tuesday at 10am followed by removal and burial at St. Mura’s Fahan parish church, Co Donegal, on Wednesday,  July. 4. A reception will be held in McGrattan’s Bar at 76 Fitzwilliam Lane, Dublin 2, (off Lower Baggot Street) after the funeral mass on Tuesday morning.