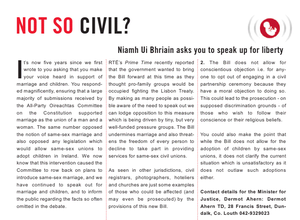 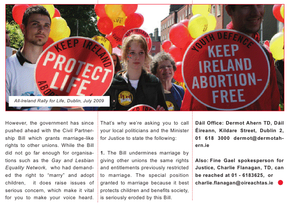 This is page 14 of of Youth Defence’s magazine Solas from 2009 concerning the civil union bill. The article is plainly and openly homophobic. It requests supporters to oppose any progressive legislation moving towards gay marriage and adoption by gays. When the .pdf began to be shared around Facebook yesterday many people reported that page 14 had disappeared. Luckily, copies of the original .pdf had been saved. I thought that this would be of special interest considering Eamon Gilmore’s recent comments about gay marriage and YD’s recent campaign and attempt to clean up their image, not to mention the Pride march and the ever-growing demand for equality.

That’s Not A Pro-Choice Poster

Oh, And This One Too…